Zlatan Ibrahimovic is returning to Old Trafford after Manchester United were drawn against Milan in the last 16 of the Europa League. The 39-year-old striker established himself as a fan favourite during his almost two-season spell at Old Trafford, scoring in the Community Shield and League Cup triumphs in 2016-17. Ibrahimovic played a key role in that season’s victorious Europa League run, but a serious knee injury in the quarter-final against Anderlecht ruled him out of the remainder of the campaign. 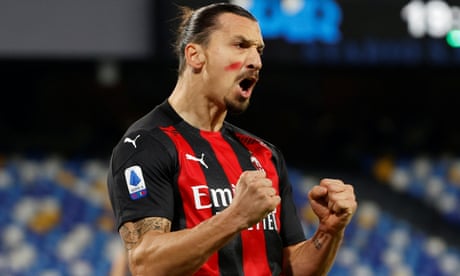 He made only seven more United appearances and looked set to wind down his career when he moved to LA Galaxy in March 2018, but he has flourished since returning to Milan in December 2019.

Stefano Pioli’s men are second in Serie A and are set to provide tough opposition for Ole Gunnar Solskjær’s side, with Old Trafford due to host the first leg on 11 March before the return at San Siro on 18 March.

Arsenal have been drawn against Olympiakos, so will return to the Georgios Karaiskakis stadium in Piraeus, which hosted Thursday’s last-32 second leg against Benfica because of Covid-19 restrictions.

José Mourinho’s Tottenham have been drawn against the Croatian champions, Dinamo Zagreb. Rangers’ reward for beating Antwerp is a tie against Slavia Prague, who shocked Leicester in the last 32 on Thursday.